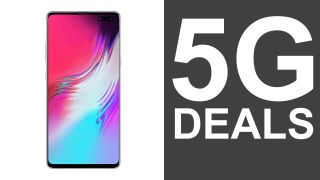 5G technology: how it works
4G vs 5G: how they compare
5G use cases: examples of 5G
5G Dangers: the fact and fiction
5G Internet: will it replace fibre
5G security: the full picture
5G speed: guide and tools
5G phones: discover the best
5G networks: in the US and UK
5G stocks: investment tips

Now we're in 2020 5G phones - and the deals on 5G handsets - are going to really hot up. We're expecting a new raft of 5G handsets to launch from February onwards, starting with the Samsung Galaxy S11 series which we think will actually debut as the S20 series.

One by-product of newer 5G phones coming onto the market is tht networks and manufacturers will be keen to sell off their first generation 5G phones - the ones we've featured in this piece so far.

On this page we've gathered together the best 5G deals on the hottest handsets - whether you're buying 5G phones in the US or the UK. Our 5G deals are constantly updated with our easy-to-use and widgets which you can see below.  These deals will  change on a regular basis, so do check beck if you can't find what you want.

Even though 5G phones and networks remain in their infancy, this year will see the availability of 5G handsets ramp up significantly.

As well as the Samsung Galaxy launch, February sees the annual Mobile World Congress conference where we usually see a lot of phone announcements, so expect a lot of 5G devices to be shown off then.

We'll also see Huawei's new 5G phone series launch in March - the P40 and P40 Pro - although as with last year's Mate 30, it won't use Google apps which is a bit of a dealbreaker for many. 2020 will also see new 5G handsets from other manufacturers  including Oppo, OnePlus, Moto and more. Plus we'll also see 5G phones from those who haven't yet produced a 5G device, Sony and Nokia being key among those names.

As we mentioned, this will have a knock-on effect as 2019's 5G handsets begin to be sold off at a discount. Indeed, this is already starting to happen. Also expect both the structure and cost of deals to change as we move into 2020, due to various factors - wider network rollout, increased interest in 5G from consumers and businesses and even the fallout from Brexit if you live in the UK.

What to look for when comparing 5G deals

What to look for in a 5G phone

Here we've suggested the top deals for each of the key 5G handsets currently on the market and we're adding more as big-name 5G phones continue to roll out.

Check back as these deals will change regularly - the price widgets are dynamically populated so they'll automatically be filled with the very latest and best deals.