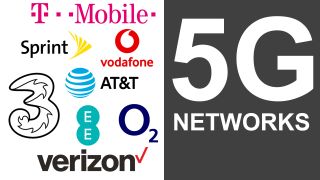 5G networks only cover major cities at the moment and even then the coverage is patchy; even close neighbourhoods can have vastly different network coverage, while some networks don't even have full coverage maps.

And, what's more, 5G networks also differ in how they're planning on rolling out the next phase of 5G.

All the UK networks so far have opted for the drip-drip approach of covering main areas of major cities first, then switching on 5G as 'bolt-ons' to these services, often covering suburbs of the larger cities next. Three UK is planning on a wide rollout in 2020 after delaying its 5G mobile service due to problems rolling out its new cloud-based core network.

By contrast, T-Mobile in the US has joined AT&T in attempting to cover as much of the US as possible, as quickly as possible. It's doing this by using low-band spectrum that isn't much quicker than 4G, plus AT&T also rolled out 5GE, which is basically 4G LTE Advanced.

Though these moves, AT&T intended to cover 5,000 locations as soon as possible, covering up to 200 million people. AT&T is simply referring to its standard network as "5G" rather than 5G+, which is the name it's reserving for it mmWave (high-band) technology.

Indeed, while many of the US networks are using the high-speed millimetre wave tech, the UK networks aren't using milometer wave as yet, preferring mid-band networks that promise greater coverage (though don't have the same top speeds). However, that situation will change in the coming years - even if not in the short term.

And then, of course, there's the selection of phones. With no 5G iPhone as yet (due in September 2020) and the need for space to cool the 5G modem and other parts, most 5G phones have two things in common at the moment; they're big and also expensive.

We've already seen some cheaper devices emerging but a better range of 5G phones will debut in the next few weeks. February's Mobile World Congress show in Barcelona always sees a lot of new phone launches and this year's edition will be all about 5G.

One area a lot of the networks have in common is the selection of phones - especially between the UK networks where the offering is very similar.

Let's run through each of the key US and UK networks one by one and check out where they are in terms of their 5G availability.

AT&T's 5G network rollout is well underway after a slow start. AT&T has been putting its efforts into "5GE" - essentially some clever branding for 4G LTE Advanced technologies. 5GE is not 5G.

5GE is not great because it's confusing for consumers and it's wholly possible that the strategy may backfire long-term. Why would customers upgrade when their phone already says 5G in the top corner?

The network has a handful of cities covered by mmWave deployments - the best 5G tech in terms of overall speed - and says it will expand to 30 US cities by the end of the year. It is calling this network 5G+.

And then AT&T has been rolling out what it calls, simply, '5G'. This is a low-band network that doesn't really offer a great deal more than 4G networks, but has the advantage of widespread coverage - AT&T is working toward offering “nationwide coverage” in the first half of 2020 but has covered around 200 million people already.

Sprint may not be using mmWave for faster speeds (yet), but its focus on mid-band coverage could pay short term dividends in terms of wider coverage. The network also has a decent selection of phones available. Sprint's rollout is on pause currently as we await the result of its merger bid with T-Mobile.

Speeds shown so far are still decent,  while there are several unlimited plans to choose from that include various extras such as Amazon Prime and Tidal access.

Sprint will also be providing 5G service to Google Fi in due course as well, though there are some question marks over ongoing rollout. As we said above this is due to Sprint's proposed merger with T-Mobile which, although approved by the authorities, is currently experiencing legal challenges.

As we said above there's a cloud over T-Mobile's 5G rollout; a proposed merger with Sprint - green lit by the authorities - is undergoing a legal challenge. The merger would give its 5G network a boost.

Its mmWave network is limited at present. Sprint, on the other hand, boasts low-band spectrum needed for a wider rollout. T-Mobile has embarked on a low-band, nationwide rollout of a slow 5G service, however.

However, if the merger goes ahead it will be costly - the combined company will be forced to sell off some spectrum to Dish to ensure there is still a fourth competitor in the market.

Verizon was the first US network to launch 5G and its mmWave-based network is now well underway, albeit with very limited coverage in each city where it has rolled out.

The company is targeting much better service in 2020 - it has talked about 50 percent US coverage being the aim by late next year.

Verizon is offering various 5G handsets on unlimited 5G tariffs which normally cost an extra $10 a month but are premium-free for a limited time. The network is also offering a 5G home broadband service, too, although this remains in limited areas at present.

Probably the furthest ahead of the UK networks, EE has the widest 5G phone offering in the UK. It has launched 5G in 50 cities at the moment, but 5G will be coming to many more in 2020.

BT Mobile runs as an MVNO on EE's network (BT now owns EE) and has also now launched 5G services in the same locations as EE.

O2 has also now launched a 5G network and rolled it out in the UK's capital cities first - London, Cardiff, Edinburgh and Belfast in addition to Leeds and Slough (where O2 has offices). The network now has 5G services in around 20 locations and is aiming for around 50 towns and cities by the summer.

O2 has a very similar selection of handsets to Vodafone's 5G network. Indeed, it has more than that in common with Vodafone - O2 shares various elements of network infrastructure with it.

O2 is offering several unlimited 5G tariffs just like the other UK networks.

Three is only offering a London-based 5G network at present - and it's all based around home 5G broadband in limited areas.

In November 2019, Three admitted its 5G launch would be delayed and would instead take place in early 2020.

Three is already offering four 5G phones so customers can be ready when its 5G network goes live.

Vodafone might not have been first to launch 5G in the UK, but it set the cat amongst the pigeons when it revealed unlimited 5G tariffs.

While Three has offered unlimited tariffs for a long time, it was something of a departure for one of the big networks - and EE and O2 have now had to follow suit.

Vodafone clearly wants to position itself as the challenger network to EE (rather than second-placed network O2) and is also offering a decent selection of 5G phones in addition to a combined home broadband and 5G mobile offering called Vodafone Together.