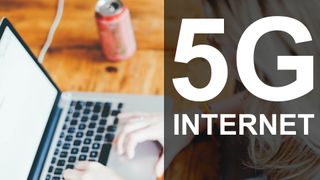 5G technology: how it works
4G vs 5G: how they compare
5G use cases: examples of 5G
5G Dangers: the fact and fiction
5G security: the full picture
5G speed: guide and tools
5G deals: get the best offers
5G phones: discover the best
5G networks: in the US and UK
5G stocks: investment tips

Broadband on 4G has established that there's a potential market for 5G broadband. And the idea that a mobile network could replace a fixed connection at home or in the office is now something that deserves serious consideration.

Before now a mobile broadband connection simply could not compete with fixed in terms of speed, while data restrictions have been a necessary measure to maintain overall quality for all users on the network.

This is where 5G comes in. The new generation of mobile technology brings with it many benefits, but chief among them is that speeds will rival and surpass the speeds of current fixed networks.

And that's exciting for bringing fast connections to all - including areas where it has so far been impossible to roll out fixed line fibre broadband.

The potential of 5G internet

By 2024, Ericsson believes 5G networks will boast 1.9 billion subscribers, carry 35 percent of the world’s data traffic, and cover 65 percent of the global population. This creates a huge potential market for 5G broadband, which is viewed as one of the key new applications in the early years of 5G.

Low-band spectrum will ensure widespread coverage, while mid-band and high-band frequencies boost the performance of 5G broadband to fibre-like performance levels and even higher. In the UK, regulator Ofcom has auctioned 3.4GHz airwaves, while US 5G networks are using high-band mmWave spectrum of 26GHz and above in their 5G technology.

Ofcom is set to have a further auction next year, releasing a further 200MHz of bandwidth for 5G network services - specifically this equates to 80MHz worth of 700MHz and 120MHz of 3.6-2.8GHz spectrum.

Each UK network will be able to hold a maximum of 37 per cent of usable UK spectrum after the 2020 auction.

Trials of commercial 5G Fixed Wireless Access (FWA) networks using mmWave spectrum have achieved between 1-3Gbps, while analysts believe that consistent speeds of between 80 and100Mbps are achievable in a real world setting. Speed is no longer an issue.

Although fibre has significantly faster theoretical speeds, coverage is limited in markets like the UK. The overwhelming majority of superfast broadband in the UK is powered by Fibre to the Cabinet (FTTC), which uses copper for the final part of the connection, reducing speeds. Full fibre accounts for just three percent of the market.

This means that the average broadband speed in the UK is 46.2Mbps, while the number of urban users receiving less than 80Mbps is 85 percent. This is half the promised speed of 5G Internet.

Although BT, Virgin Media and others are expanding their Fibre to the Premise (FTTP) footprints, 5G FWA is cheaper to deploy than fibre because there is no need to dig up streets or for engineers to install equipment at a home or office. It will also take time for coverage to expand, with the government targeting nationwide coverage by 2033.

In short, 5G can deliver faster speeds, more quickly than fibre. And that's going to change things a great deal.

What services are available?

5G stands to succeed where other attempts to establish a wireless broadband standard, such as WiMax, have failed. Because 5G broadband is based on the same standards as 5G, it already has widespread support from operators and equipment manufacturers. In that sense, it's not forging a new path but one that's been accepted for several years.

Operators are more excited about 5G broadband than they were with 4G. The additional capacity and lower cost-per-bit of transmission means they can market FWA as a genuine fibre replacement and open up additional revenue streams that maximise their infrastructure investments.

In the UK, all of the networks now have a 5G service to some degree. In terms of 5G broadband though, the choice is limited.

Three is already offering Three 5G FWA services to parts of central London. The initial focus is on mobile data services, but it hasn't yet launched 5G phone services - that's been delayed due to a delay with Three's new cloud-based core network.

Vodafone plans to use its MediaCity UK 5G Innovation Hub as an ideal test case for FWA and Vodafone 5G. Three is cagey about where exactly it has extended 5G FWA to at present - we were expecting more detail by now. A handful of areas were covered when we were previously updated on the plans, including Camden, Camberwell and Southwark. But it hasn't updated us since.

For EE, 5G broadband firmly on the agenda as parent BT develops converged networking services. 5G broadband is also seen as a way to extend superfast broadband coverage in areas not served by fibre.

However, we've been told by an EE employee that the best case scenario for EE/BT currently is to sell customers a combination of services, such as BT Halo - a 5G mobile and home fixed broadband service. So we're a little way off from 5G broadband being seriously in the picture.

Halo is a new plan, suitable for both home and business customers. It sits above existing ‘Plus’ packages and includes unlimited usage for both mobile and broadband.

Halo for Business includes an always connected guarantee and customers can add 4G and 5G mobile connections. Businesses can make and receive calls on their landline number straight from a mobile, so you needn’t worry about missing an important call (read the full story on BT Halo here).

In the US, 5G Internet was the focus for AT&T and Verizon, with both launching their respective Verizon 5G and AT&T 5G services in late 2018. Both are using mmWave spectrum to provide broadband services to major cities, many of which are served by a single cable operator, reducing competition.

The flexibility of 5G broadband

For residential or home office users, there’s a realistic case to be made for adoption. Ovum says the average UK household currently consumes 190GB a month – a figure that will increase to 516GB by 2023 thanks to the popularity of video streaming services, online gaming, and other applications.

Ofcom estimates there are 860,000 premises in the UK with broadband speeds lower than 10Mbps. If 5G Internet is available in such an area, then it makes sense for a small business to cut the cord and benefit from significantly faster speeds. For those areas where it hasn't been financially viable to introduce fibre broadband, 5G connectivity could really change the level of connectivity available to communities.

But even in areas served by superfast broadband, 5G broadband can be transformative. Businesses in shared office facilities or business parks might only have one choice of provider – the one selected by the owner of the building. Meanwhile, startups in co-working spaces have to rely on a common Wi-Fi network. 5G broadband gives more freedom and superior connectivity.

5G broadband is also more flexible than fixed and so can be placed anywhere. Equipment is ‘plug-and-play’ so there is no need to wait for an operator to lay cables or for an engineer to complete an installation. Businesses can get up and running more quickly.

The gear can also be placed anywhere within a home or business - the router doesn't need to be placed in a position near the socket. This should improve signal and range through better placement.

This is significant for organisations that have branch offices, or industries like construction where staff are often located in areas with no fixed connectivity for relatively short periods of time. Flexibility is also a significant asset during an office move as businesses just take their equipment with them. There’s no need to contact a provider and wait for a new installation.

However 5G FWA is unlikely to be an option for larger businesses with bigger workforces. Enterprises generally have access to dedicated Ethernet connections that provide the speed and capacity required to power employee devices and mission critical applications.

SMBs should also consider the fact that the wider availability of full fibre in the future years means 5G will lose any speed advantage in currently under-served areas. And in countries where FTTP is widespread, the speed argument is negligible.

Three CEO Dave Dyson, one of the biggest proponents of 5G broadband, admits that speed will eventually become less of a pain point, but says his firm isn’t targeting power users.

“We’re not looking for 100 per cent market share, we just need the market to be big enough,” he says. “[5G FWA] technology is complementary [to fibre],” he says. “To get the UK fully fibred up is going to take a decade. If you want to get ultrafast broadband as fast as possible, you can do it quickly and more cost effectively [with 5G FWA].”

But even coverage will be an issue. Although rollout is likely to be rapid, it will take time for 5G to become widespread as operators invest in their infrastructure. Huawei, for example, believes it won’t be until 2027 before the majority of the UK has access to 5G.

The inevitable focus on deployment will be on urban areas, meaning that rural areas that stand to benefit the most from 5G broadband will have to wait for the network to come to them.

The role of convergence and Wi-Fi 6

However, one area where 5G will likely play a role in the enterprise space is convergence.

While previous generations of Wi-Fi have had complicated, technical names like 802.11ac, the next generation of Wi-Fi will be known as ‘Wi-Fi 6’. This mimicking of mobile’s nomenclature is deliberate, with the wireless industry positioning Wi-Fi 6 as a complementary technology to 5G.

In addition to faster speeds, Wi-Fi 6 lowers latency, increases capacity and significantly improves battery life. These characteristics will support converged networking services in which the lines between fixed, wireless and mobile are blurred, with the most optimum networking technology used to transmit data.

This combination of technologies demonstrates the increasingly blurred lines between different networking technologies. In the future, business won’t care which standard is used to connect people, applications, and things just so long as they are connected.

5G’s role in this is to break down the historical disadvantages of cellular connectivity. FWA currently accounts for just two percent of the global market, but Analysys Mason suggests the market opportunity with 5G is between 20-30 percent, or 290 million addressable premises.

5G Internet is a genuine alternative for small businesses, branch offices and rural organisations but in areas where FTTP is available or flexibility isn’t as prized, then this appeal is reduced.

Fibre will remain the predominant form of communication for the majority of businesses, but 5G and converged services will play a vital role in the era of ubiquitous connectivity.