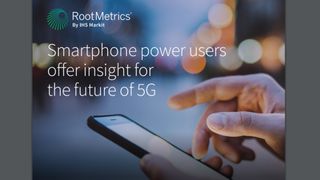 According to a new report from RootMetrics, 5G is becoming increasingly important for power users. (Image credit: RootMetrics)

RootMetrics, an independent mobile analytics firm, has conducted a survey of smartphone users in the U.S. and UK. And the results show that the always-on, connected mobile user is increasingly looking for a better connection, and an improved quality of service, as phones become the backbone of their daily lives and activities.

The report split users into different groups, at the top of which were ‘wholly dependent’ mobile users (often referred to as ‘early adopters’ when discussing technology and its early take up).

Key findings within the survey revealed that 30 percent of users surveyed qualified as “always on”, and expected constant connectivity for daily activities. Of this,

12 percent went on to identify as “wholly dependent” power users, and said that they needed a mobile connection for both lifestyle and economic reasons.

Within this small but influential group of wholly dependent power users, 87% have found 5G phones to be a significant improvement over those using 4G LTE. And 41 percent agreed that their next phone contract must include 5G.

A further 71 percent of users said that a slow mobile internet connection reduces their productivity, and 40 percent said it leads to a loss of customers.

The full PDF report can be downloaded here.

The Smartphone Power User survey was conducted during September 2019 and the sample size included 2,000 respondents from the UK and 2,000 respondents from the US, which reflected a cross-section of both countries. The survey was designed to test and robustly analyse the mobile experience from the consumer’s point of view as well as gauge perceptions on what’s expected with 5G.