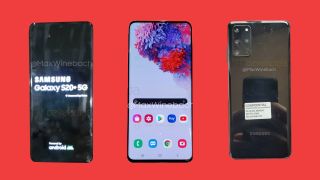 Samsung’s annual Unpacked event is less than a month away, and leaks of its next 5G phones are already starting to make it online. And thanks to the team at the XDA Developers blog and forum, we are getting our first look at what appear to be genuine images of the Galaxy S20+ 5G. And all this in spite of a ‘Confidential’ sticker on the back of the device warning against leaking.

The first images of the Galaxy S20+ reveal that it will have an Infinity-O display, which has a centered punch hole. The curved display remains, but will use a less prominent curvature than before, suggesting that it will feel almost flat to the touch. It has also been said that the Galaxy S20 series will pack 120Hz displays for impressively smooth refresh rates.

“It's hard to tell without scale, but the phone is massive,” said Max Winebach, a writer for XDA Developers, who broke the leak. “It's also slightly smaller bezels and a smaller centered hole punch. also no bixby button and volume rockers on the right.”

Taking a look at the back of the device, you can see a quad-camera set-up that aligns with previous rumours. And the Galaxy S20+ is expected to pack an ultra-wide, telephoto and macro lens alongside the main camera sensor. The images also show a Galaxy S20+ 5G booting up which is the first we have seen of its kind.

Overall, there isn’t anything that shocking or surprising about the Galaxy S20+ 5G’s design, and it looks in keeping with what you would expect from Samsung.

Samsung will officially unveil the Galaxy S20 at its Unpacked event on February 11th. On top of this, we expect to see the company’s second foldable phone, which rumours claim will be called the Galaxy Bloom.