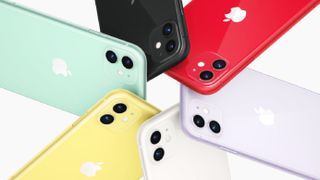 Analysts at JPMorgan say that Apple is likely to release four new 5G phones towards the end of 2020. This predicted release date puts Apple even further behind rivals such as Huawei and Samsung, who have already released their 5G-enabled devices.

Specifications and sizes for the new range of iPhones have already been speculated, including models measuring 5.4 inches, 6.7 inches and two at 6.1 inches.

And Apple has remained incredibly quiet on the topic of 5G, which has raised some critical eyebrows from industry experts.

Could Apple fall behind?

Various analyst reports predict that the 2020 iPhones will resemble the latest 2019 options, just with the added feature of 5G. This could disappoint some consumers who have waited patiently for the release.

And Apple’s inability to provide a 5G handset until the end of 2020 will give Samsung a competitive edge over its Cupertino rival. Reasons behind the delay are unknown, but some suggest that it may be down to the company’s move away from Qualcomm to Intel as a chip provider.

Having said this, a late 2020 release could well coincide with the maturation of 5G networks, and with a much larger potential audience at that point, it’s debatable just how much damage – if any – a delay might cause.

Currently, 5G is only sparsely available across the UK which has been a major hurdle for consumers. Why pay more for a 5G phone if the network isn’t even available where you live?

If Apple’s new devices arrive once this availability issue has been addressed, the company will be perfectly placed to ride the wave of interest around 5G. Furthermore, Apple will be able to observe any 5G hurdles that competitors have had to avoid, making it better prepared once its own offering is released.