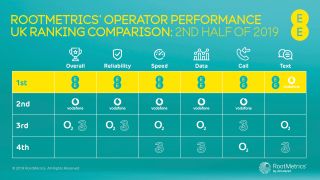 EE has taken the top spot for overall performance in RootMetrics’ latest national results for the 13th consecutive time and now the best performing 5G network too. EE, owned by BT, was named number one for overall performance, reliability, speed, data, and call, and joint first for text, whilst also recording the fastest aggregate median download speed across the UK at 36.5 Mbps, in RootMetrics’ 2H 2019 tests.

"We’re continuing to invest in our network to help keep our customers connected to the things that matter most, whether that’s rolling out 4G to even more places or being the first to bring 5G to the busiest places across the UK," said Marc Allera, CEO BT’s consumer division.

EE has also come first across the nations, winning the overall performance award in England, Ireland, Scotland and Wales with a total of 28 wins, followed by Vodafone, in a comfortable second place with 9 wins and O2 and Three with 0 wins.

This testing was RootMetrics’ first look at 5G networks and found that EE has the best performing 5G network, with the most coverage in London, Birmingham and Cardiff, and the highest average download speed.

During the 5G First Look testing, RootMetrics scouters were busy testing the early stages of EE 5G and Vodafone 5G rollouts in London, Birmingham and Cardiff and found the performances of EE 5G and Vodafone 5G to be impressive, with EE recording faster 5G median download speeds and offering greater 5G availability than Vodafone in all three cities tested (neither O2 nor Three had launched 5G at the time of testing). Testing in London recorded EE’s 5G maximum download speed at 327.1 Mbps and Vodafone’s at 314.8 Mbps.

"The importance of fast and reliable mobile connectivity is greater than ever for both consumers and businesses alike, and we’re at a pivotal moment," explained Kevin Hasley, Head of Product at RootMetrics. "The speeds recorded in our 5G testing show game-changing differences, whilst lower latency will improve immersive user experiences such as virtual reality and gaming. Combine the faster speeds, lower latency and greater capacity of 5G, and we’re moving closer and closer to the core of what is required to provide a hyper-connected world."

Although the London speeds are impressive, they trailed what RootMetrics recorded in Birmingham (EE at 450.9 Mbps) and Cardiff (Vodafone at 345.9 Mbps), and they were much slower than the fastest maximum download speeds that RootMetrics has found to date in the USA (Verizon at 1.1 Gbps in Chicago) and South Korea (LG U+ at 902.7 Mbps in Seoul).