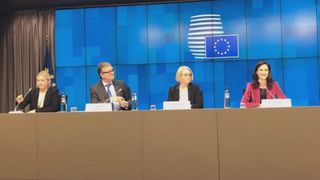 The EU coordinated risk assessment on 5G security appears to be agreeing with the US on its opinions of Huawei posing a threat. The report [download PDF] dropped no specific mention of Huawei or China, but hinted strongly by claiming that “threats posed by states or state-backed actors are perceived to be of highest relevance”.

The European Commission and Finland also said the following in a joint statement:

“Among the various potential actors, non-EU states or state-backed are considered as the most serious ones and the most likely to target 5G networks.

“In this context of increased exposure to attacks facilitated by suppliers, the risk profile of individual suppliers will become particularly important, including the likelihood of the supplier being subject to interference from a non-EU country.”

Huawei has said that it wants to work with its European partners on 5G network security.

“This exercise is an important step towards developing a common approach to cybersecurity and delivering safe networks for the 5G era,” a Huawei spokesman said.

In response to the report, he went on to say, “We are pleased to note that the EU delivered on its commitment to take an evidence-based approach, thoroughly analysing risks rather than targeting specific countries or actors.”

It appears that the company is still hopeful that the EU won’t act without valid evidence to do so. Whereas the US and a number of countries seem more happy to label Huawei as a security threat without the evidence to support it.

And despite the report’s findings, EU countries remains split. The UK is leaning towards an exclusion, possibly due to being a close US ally. On the other hand, Germany wants all 5G suppliers to prove that they are trustworthy, providing Huawei  with the chance to make a case for its technology.