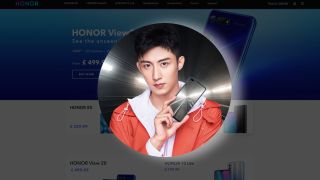 Honor has teased the launch date - November 26th - and a selection of key features for the upcoming release of the Honor V30 phone, most notable of which is 5G connectivity.

Honor made the announcement in a social media drop fronted by Johnny Huang, the Chinese actor and model with more than 11 million followers on Weibo. Making the announcement via its Weibo account, Honor shared two images, both of which appear to show a front-facing dual camera.

In the Asian market, two front-facing cameras are becoming the norm, with brands such as Huawei, Oppo, and Redmi leading the way. And for those wondering why, the answer is quite simple: selfies. By putting two lenses into the front of a phone, manufacturers are able to provide a wider field of view on one lens, enabling you to get more people into an image taken at arm’s length. (For example, the Google Pixel 3 has one camera with a 75-degree field of view; whilst the other has a wide-angle lens with a 97-degree field of view.)

The phone is likely to use the Kirin 990 processor, and will be the company’s first to join the growing list of 5G phones, enabling Honor to go head-to-head with the likes of Huawei and Samsung in 2020.