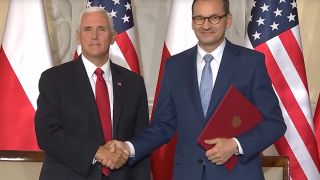 This week, the US and Poland have signed a joint declaration pledging to keep “bad actors” out of next-generation communication. Despite not directly mentioning Huawei, it seems like the mobile brand might have initiated the pact. The US continues to discourage other countries to use the company.

Again, Huawei wasn’t named in the agreement. However, it did state that 5G suppliers should be carefully evaluated to decide “whether the supplier is subject, without independent judicial review, to control by a foreign government,” according to the Wall Street Journal.

Protecting from disruption or manipulation

The agreement states that “protecting these next-generation communications networks from disruption or manipulation and ensuring the privacy and individual liberties of the citizens of the United States, Poland, and other countries is of vital importance”.

It’s hard to believe that this agreement wasn’t prompted by the security concerns surrounding Huawei. The US flagged the company as a security threat over concerns that they were being used by the Chinese government for potential cyber-attacks or spying. Huawei has consistently denied these allegations.

The Polish Prime Minister was asked at the press conference whether they had any evidence that China spied using Huawei technology. The response was, “Polish counterintelligence have detected certain actions, which might have been an espionage nature”.

The US is hoping that this joint declaration will serve as an example to other countries when it comes to deciding what providers to allow when using 5G. The pact has also brought into question the broader issues surrounding 5G and many countries still remain on the fence about Huawei. The UK is set to make a decision this Autumn.