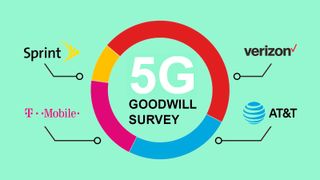 Wall Street research firm Cowen conducted a survey with 1,105 people to find out which carrier the public believed to offer the best 5G. The company collected results from “participants meant to represent the US population natural fallout."

The question was: "Which carrier do you perceive has the best 5G network?"

And the options were AT&T, Sprint, T-Mobile or Verizon.

Of the major 5G networks in the U.S., Verizon won with a 47% vote, AT&T second with 25%, T-Mobile third with 20% and Sprint lagging behind with only 9% (these percentages were rounded up).

In a report on the results, the Cowen wrote that "it appears Verizon's '5G Built Right' campaign, which is focused on its mmWave buildout is resonating".

It might not just be campaign work, but results too, as 5G benchmarks closely align with the overall brand perception of Verizon. Cowen explained this by saying that "Verizon could be enjoying collateral goodwill" in 5G.

The fact that Verizon has the best public perception regarding 5G, despite its millimeter-wave (mmWave) 5G network having low coverage, shows that the nationwide advertising campaign worked wonders. Throughout 2019, Verizon put 5G at the forefront of all advertising, obviously hitting a note with the general public.

Ad spend could have been a factor

Verizon spent an estimated $86 million in 2019 on TV ads about 5G. Considering that’s just TV ads, Verizon likely spent much more to include advertising on billboards, magazines, online and much more.

Having said this, AT&T spent an estimated $90 million on TV ads on 5G. This was a little more than Verizon, but the company only started selling 5G to customers at the end of December last year.