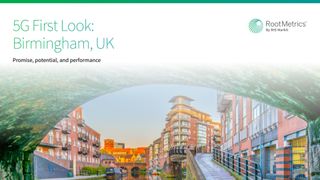 The 5G First Look report from RootMetrics features testing across Birmingham, where both EE 5G and Vodafone 5G have deployed. Neither O2 or Three have launched 5G at the time of testing, but Three has stated that it plans to roll out Three 5G in Birmingham before the end of 2019, with O2 5G following suit in 2020.

For the report, RootMetrics conducted 8,883 test across the city, visiting 25 indoor locations, and using a selection of handsets (the OnePlus 7 Pro 5G on EE, and the Xiaomi Mi Mix 3 5G on Vodafone).

At the time of writing, one of the killer features of 5G is its blistering speeds, but in this nascent rollout period, availability is probably the primary issue that users will face, as they move from one area to another. And the results in Birmingham suggest that EE and Vodafone are both off to a good start.

And while EE’s 5G footprint in Birmingham was much more widespread than that of Vodafone, it’s still early days. And the report states that “it can often take months or even a few years for a new network technology to fully mature and become ubiquitous across an entire city”.

Commenting on the report, Marc Allera, CEO of BT’s Consumer Division said: “Our number one priority is keeping our customers connected to the things that matter most. This recognition of the early performance of our 5G network reflects our continued investment in delivering the best mobile experience, and our ambition to connect customers 100% of the time.”

As expected, EE and Vodafone both delivered impressive median download speeds on 5G in Birmingham, and both operators’ 5G speeds were much faster than those recorded on non-5G mode. And to put this in context, the image below illustrates the time it takes to download a 600MB video at the 5G median speeds of EE and Vodafone compared to the non-5G mode speeds of EE, O2 Three, and Vodafone.

Further good news for Vodafone and EE was that even when 5G was not available, the operators also delivered some of the fastest non-5G mode speeds RootMetrics has seen.