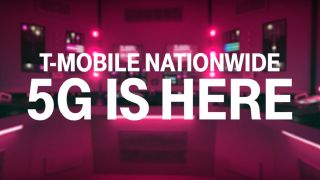 T-Mobile 5G has officially being switched on, with a huge coverage of 200 million Americans. Although the shiny new network is now live, no one is going to be able to use it until Friday 6th December, when the two supporting 5G phones go on sale.

For mobile users in the UK:
Get all the latest EE 5G deals
See the latest phones on O2 5G
Check out Three 5G broadband
Get the latest Vodafone 5G info

For mobile users in the US:
See the hottest AT&T 5G deals
Sprint 5G is rolling out now
Discover hot Verizon 5G deals

The nationwide 5G deployment uses T-Mobile’s 600MHz spectrum, which is a “low band”, slower form of 5G technology. It uses similar airwaves to those used for LTE, but pairs them with 5G technology, for faster speeds; this has led to some drops in performance, though.

“In some places, 600 MHz 5G will be a lot faster than LTE. In others, customers won’t see as much difference,” a T-Mobile spokesperson told The Verge.

This certainly could be disappointing for some 5G fanatics as – in some places – T-Mobile’s 5G won’t be particularly faster than existing 4G.

However, by relying on LTE, which travels further, the company is able to deploy 5G practically nationwide, and much faster than other companies. In fact, it’s the first major wireless carrier to claim nationwide 5G coverage.

So, whilst the coverage is impressive, the speeds won’t be the fastest that 5G can really offer.

What phones will support T-Mobile’s 5G?

On Friday, T-Mobile will begin selling the OnePlus 7T Pro 5G McLaren Edition for $899.99, and the Galaxy Note 10 Plus 5G for $1299.99. Both devices will connect to its 600MHz 5G network, and all T-Mobile plans include 5G access. And the phones will not support mmWave, which is what other companies are using to deploy 5G.