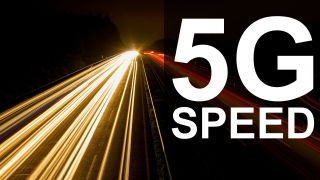 5G technology: how it works
4G vs 5G: how they compare
5G use cases: examples of 5G
5G Dangers: the fact and fiction
5G Internet: will it replace fibre
5G speed: guide and tools
5G deals: get the best offers
5G phones: discover the best
5G networks: in the US and UK
5G stocks: investment tips

How fast is 5G? That's the question that's continually posed by people asking what 5G phones and 5G networks are actually like?

The problem is that there isn't a simple answer to that question - but you knew that already! It's certainly true that confusion still remains over just how fast it can be. The main issue when talking about the out-and-out speed of 5G is that there are different types of 5G.

Which one you'll use depends on what network you're on, what version of 5G your network is using, what device you have and what plan you're on - some networks will have premium plans that will get you access to faster services in due course.

In our 5G technology explainer, we outlined four of these flavours and in this article we’re going to delve deeper into the truth behind these 5G speeds – what the terms mean, theoretical versus real-world speeds, and the best apps and services that reveal what 5G speeds you’re getting.

Of course, there are many other factors, too, which is why these early days of 5G are somewhat complicated. Let us explain further.

The different types of 5G

There are four significant types of 5G ranging from so-called standard 5G to industrial 5G.

The speeds achieved on each flavour vary based on the technology and how the data and signals are being used. We've outlined the key categories in the table below. Read more about these on our 5G technology page.

The problem is that networks rarely talk honestly about what kind of 5G they are using - and that can be an issue when comparing services. The main thing to avoid is anything in the first category - so sub-standard 5G services that actually aren't 5G at all. This is a problem in the US currently with certain services but isn't an issue in the UK at present.

For each iteration of mobile technology, standards are put in place by a group called 3GPP to make sure the technology reaches a certain set of benchmarks, to protect consumers and regulate how the technology is deployed and used.

Other key partners are organisations that bind together other organisations with an interest in telecoms standards. These include the GSMA - the trade body that joins together mobile operators - and the Wireless Broadband Alliance, intended to further interoperability between Wi-Fi standards.

Within the 5g standards is a minimum speed that must be achieved for an operator to be classified as having a “5G network” and this has been set at 20Gbps downlink and 10Gbps uplink per mobile base station.

The latter point is key. These are the minimum download and upload speeds that must be achievable by a single cell on a network. They aren’t the minimum speeds consumers will see, or should expect, on their devices. In short, this is a standard for networks to achieve, not for consumers or businesses to achieve.

In theory, if you were connected directly to a single cell via a fixed line and weren’t sharing this connection with any other users, you could reach these speeds. Such speeds have been achieved in lab conditions. In fact, lab tests have hit staggering speeds of 1Tbps.

Of course, in the real world where we’re surrounded by billions of connected devices all receiving and sending signals simultaneously, these maximum speeds are out of reach.

The reality, instead, is that those 20Gbps will instead be split between every device connected to a cell. What’s more, seeing as 5G cells must also be able to support at least 1 million connected devices per square kilometre, chances are these speeds will be greatly fragmented.

As a result, the 5G specifications call for a per-user download speed of 100Mbps and 50Mbps upload. This is close to what is achievable on LTE networks, although while these speeds are rare on LTE, they’re likely to be standard on 5G.

That's key - that the peak of speeds you could get on 4G LTE are actually going to become the norm. If you take one thing away from this article, that's probably the main point.

Of course, there will always be external factors that affect 5G networks, just as there are with 4G networks. These include how far you are from the cell, whether you’re walking or in a moving vehicle or train, the type of device you’re using, which network provider you’re with and more.

Real-world 5G speeds already vary wildly and will continue to do so, even as the technology matures. As a guide:

To put this into perspective, here’s how long it would take to download a 5GB movie via the  various networks at the top end of their average speeds.  (It’s also worth pointing out that the 5G speeds may feel faster due to the improved latency seen on 5G networks.

The 5G standards require a minimum latency of 4 ms in ideal conditions, down from LTE’s average of 20 ms.)

A 4G connection will typically peak at around 20Mbps, although more consistently hits 10Mbps.

5G Plus pushes this further, with real-world tests revealing average speeds between 300Mbps up to 1Gbps and some even hitting twice this maximum.

5 apps to test your 5G speed with

Now that you know what speeds you could have won, and the speeds you’re more realistically likely to achieve, there is a number of 5G speed tests that can be used to check exactly what you’re getting.

We’ve selected a range of speed tests that show the most basic of information, up to the more complex settings and frequencies.

Available online, as well as via apps for Android, iOS, Apple TV, Google Chrome, MacOs and Windows, Ookla’s Speedtest is an easy way to check your web speeds.

It shows your average download and upload speeds as well as your ping and jitter readings, the number of connections, the server name and location and network details.

These results can be stored, or shared. And the site also boasts a 5G Map, which you can find here.

OpenSignal is an independent analytics firm that specialises in measuring and monitoring mobile network speeds and experience and offers two apps.

Its original OpenSignal app helps you “accurately measure the everyday experience you receive on your mobile network”. Instead of giving estimates, predictions or the maximum speeds possible over any given connection, the OpenSignal results are closer to what speeds you’ll likely experience when using your phone normally. The app additionally helps you find the strongest signal in your area, by following an onscreen arrow, shows coverage maps, for all UK networks, and reveals your recent data usage.

Alternatively, its Meteor app breaks down what these speed readings mean in real-world scenarios, and while using real-world apps. The latter is particularly useful for telling you whether your connection is strong enough to stream an online video, or use a navigation app. Elsewhere, it helps you monitor where your fastest connections have been on a map.

Despite being called a broadband speed checker, 5G Comms’ speed test powered by NetMeter.uk can be used to test web speeds on data plans, as well as over wired and wireless Wi-Fi connections. The results reveal the connection’s median ping, download speeds and upload speeds.

The 5G Comms version of the test is more user-friendly than NetMeter’s original, showing only the most relevant information.

And if you want to learn more about your minimum and maximum ping times as well as how quickly your specific speeds could download an MP3, CD or DVD, you can use NetMeter.uk’s test.

Available online and as an Android and iOS app, SpeedSmart offers the same ping, download and upload speed readings as others in this list but additionally features an ISP map that reveals the readings of both Wi-Fi and mobile data speeds across the globe.

You can filter by connection type and view your test history.

Built to reveal details about LTE connections, this speed test is the most complicated of the lot. It’s a theoretical throughput calculator that gives you highly specific readings based on your EARFCN, or band number. This stands for E-UTRA Absolute Radio Frequency Channel Number and is the unique frequency band being used by your particular connection, as assigned to your device by the network operator.

On Android, you can download apps to reveal your field test information depending on your handset, or the Android version you are running. Certain handsets will also enter field test mode using a similar code to the one used by iPhone. On a Samsung, for example, you can use *#0011# to see this information. The process is more complicated on Android due to the vast number of variables with Android devices. You can go to Settings | About Phone to see your signal strength.

Once you know your EARFCN, enter it in the Pedroc tool and it will automatically select the band and reveal the theoretical speeds achievable on that frequency network.

Victoria Woollaston is a freelance science and technology journalist with more than a decade’s experience writing for Wired UK, Alphr, Expert Reviews, TechRadar, Shortlist and the Sunday Times. She has a keen interest in next-generation technology and its potential to revolutionise how we live and work.