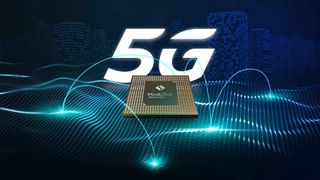 Whilst there are already a variety of 5G phones on the market, many business users aren’t interested unless there is a dual-SIM option. Dual-SIMs offer flexibility, as you can have one low-cost option, or separate lines for personal and work life. Thankfully, this option isn’t too far into the future.

MediaTek has announced the development of its new 5G system-on-chip (SoC), which will be called the Dimensity 1000. And it is being marketed as the first SoC to support 5G 2x carrier aggregation. This means that you can have two lines on the go, either combining them to deliver breakneck speeds of up to 4600Mbps, or enabling you to benefit from the flexibility of using two SIMs.

The first phones armed with the Dimensity 1000 chipset are expected to arrive in the first quarter of 2020. But one glaring omission will be the lack of support for mmWave, which is the high-frequency flavor of 5G currently being used by some 5G networks in the US (this chipset supports sub-6GHz applications of 5G standards, known as mid and low band).

MediaTek’s announcement of its new 5G chipset features comes just days after it finalised an agreement with Intel to deliver 5G modems for PCs.