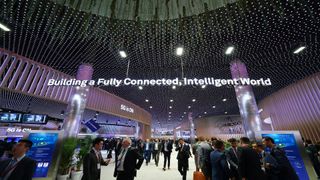 Huawei may be banned from selling its 5G technology in the US but that hasn’t stopped it from finding a way around the problem. Huawei Senior VP Vincent Pang has said that, rather than trying to sell Huawei products into the US, the company is in early talks to license its 5G tech to American companies.

Could this work for Huawei?

The talks are reportedly in their infancy, but - according to Huawei - unnamed firms have reportedly “shown interest” in both long-term and one-off deals. Pang wouldn’t say whether or not he thinks Huawei could land a deal in the short term, and it all appears to be very much up in the air.

“There are some companies talking to us, but it would take a long journey to really finalize everything,” Pang explained.

Huawei is still blacklisted in the US, with claims that the company poses a national security concern. This prevents it from doing business with US companies without explicit permission. Therefore, a license deal is likely to be considered a violation, despite the fact that no physical goods would exchange hands.

This certainly puts Huawei in a tricky situation and obtaining a license won’t be easy.

Forget where we're from

Meanwhile, Huawei is trying to convince UK Prime Minister Boris Johnson to build its 5G network in Britain. As a result, Huawei’s 5G boss has urged Johnson to “forget where we’re from”, in relation to China. However, with the UK in the midst of exiting the EU, and with a future US trade deal being a priority for any post-Brexit government in the UK, any pleas from Huawei for fair treatment are likely to fall on deaf ears.

And with the US continuing to push the narrative that Huawei tech will provide the Chinese government with a way to spy on other countries, it could take more than reassurances from the company's executives to shift the balance it its favour.

However, despite the chances of a Huawei/UK partnership looking slim, Germany  recently gave Huawei the green light to pursue contracts, which may provide Huawei with at least a sliver of hope.