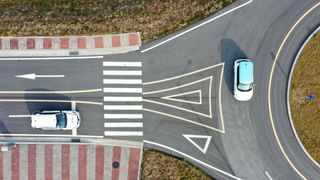 KT and Hyundai have been busy testing their real-time 5G traffic navigation which collects data from self-driving cars and transmits it to other autonomous cars for safety.

The trial was carried out at Hyundai’s autonomous car trial centre at Seosan, Chungcheong Province, where a 5G network has been installed. The real-time traffic navigation sends traffic data collected by cars to a server. This then updates the maps used by autonomous cars in real-time to warn of other cars and obstacles.

The companies wanted to test the speed and accuracy of the map updates.

KT and Hyundai deployed three cars around the centre's track, with the car in front required to perform a sudden stop if a bicycle blocked its path. The second car followed closely behind the first car, and collected data transmitted via 5G, including when the lead car need to make an emergency stop. Finally, a third car brought up the rear, and was tasked with changing lanes to avoid the hazard, using only the data mapped in real-time via 5G.

The trial was successful, with the rear car successfully avoiding the hazard.

This is the start of KT and Hyundai's research into 5G, and the part it can play in boosting the safety of autonomous cars, and pave the way toward 5G smart cities.

This isn’t the first 5G collaboration we have seen between KT and Hyundai, with the two companies having previously worked together to bring automation in construction using 5G networks. And the two companies see great potential for improved automation, thanks to 5G, and see that the automotive industry will benefit hugely from next-generation networks.