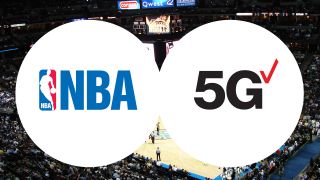 Verizon has announced that its Verizon 5G service is now available in three NBA arenas. It also plans to bring 5G to seven more by the end of the 2019-2020 basketball season.

However, there is quite a catch - Verizon’s 5G doesn’t cover all seating areas. And it seems to be a recurring issue, as it’s the same with Verizon’s 5G in NFL stadiums.

Verizon’s early rollout of 5G relies on millimetre-wave signals that don’t travel very far and are blocked by obstacles such as walls.

Verizon failed to mention this catch in its 5G arena announcement on Friday. However, when contacted, Verizon admitted that it won’t cover the whole arena in any NBA facilities, stating that it’s "just certain seating areas".

And despite it still being early days in the US rollout of Verizon's network, it is a little worrying that Verizon 5G isn’t yet capable of covering an arena that seats 17,000 to 21,000 people.

Bringing 5G to stadia and arenas

Although Verizon hasn’t yet mastered full arena/stadium coverage, it’s still planning to roll it out in several locations. Its 5G is now available in Talking Stick Resort Arena in Phoenix, Chase Center in San Francisco, and the Pepsi Center in Denver.

The announcement didn’t reveal what speeds attendees can expect, but it did promise that 5G will "enhance the game-day experience for sports fans [and] provide greater bandwidth for concert-goers, visitors, or businesses working inside the venue."

Verizon also said 5G coverage is coming soon to Madison Square Garden in New York City, saying that its 5G Ultra Wideband mobility service will be live in 10 arenas by the end of the 2019-2020 season.

Will we see full coverage?

It hasn't been made clear whether Verizon 5G will be able to cover entire seating areas in any major sports facility yet. The company has boasted that 5G will be coming to 13 NFL stadiums, but will we see full-stadium coverage?

Also, if Verizon brings 5G to a stadium or arena, it doesn’t mean that the surrounding area will have access, "in some cities the stadium will be the only place with Verizon 5G Ultra Wideband service", the company has previously said.